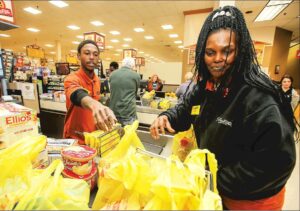 In despair, sitting at her kitchen table in Chester, Dayna Chandler, 33, began this calculation: Maybe her three children would be better off if she were dead. A former bank teller, she had a criminal conviction for theft, had been in prison, and hadn’t been able to keep a job for four years, not with that record, even though it was only a misdemeanor.

She couldn’t support her children — maybe someone else could. Her physical health was failing, but her heart was also broken, if that counts.

By a miracle, she learned that Uplift Solutions was offering cashier training to ex-offenders, guaranteeing a job at ShopRite for those who passed a six-week course. She called. By a second miracle, the program accepted her. For six weeks last summer, she commuted two hours each way, by bus, between Chester and the training, at Enon Tabernacle Baptist Church, located at the opposite end of Philadelphia.