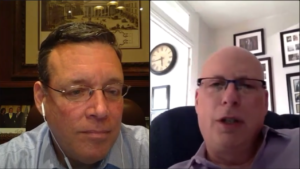 You have to wonder when—if!—Jeff Brown ever sleeps.

The CEO of Brown’s Super Stores, which includes 12 local supermarkets, many in food deserts, has his hands and heart invested in a staggering array of meaningful projects around Philly.

And on Thursday night, he joined Citizen co-founder Larry Platt for a virtual chat to talk about the lessons he’s learned throughout his lifetime in the grocery business—his dad co-owned a bodega at 40th and Girard, where Brown started working when he was eight years old—the pathways he’s carved to employ and empower youth and returning citizens, and what it would take to get him to run for office.